Justice as Translation and Counter-story Telling 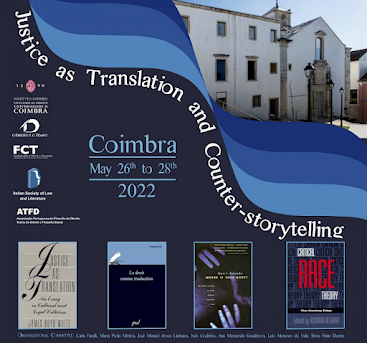 In a well-known passage from The Narrative Paradigm (Communication Monographs, vol. 52, 1985, p. 350), Walter Fisher argues that “narrative rationality”, since it “celebrates human beings” as “storytellers”, should be treated as an “attempt to recapture Aristotle’s concept of phronesis”. It is this central topos in the contemporary rehabilitation of practical thinking (projected in Law’s specific practical world) that our Colloquium will explore, whilst paying attention to the plurality of approaches it allows. Its title establishes actually an immediate counterpoint between two polarized assimilation modes.

1) On one hand we have the so-called paradigm of translation, not only in the general version that we owe to MacIntyre's communitarian narrativism ─ exploring the possibilities of dialogue between traditions (notwithstanding the impossibility of an equidistant tertium comparationis) ─ but also in the specific projections that James Boyd White (justice as translation) and François Ost (le droit comme traduction) exemplarily open: the first highlighting a kind of a permanent movement (from ordinary language to legal language, and from legal language back to ordinary language) ─whilst exploring narrative as the archetypal form of praxis and practical thinking and whilst conceiving of Law as “a set of occasions and opportunities for the creation of meaning” (“a rather fragile piece of our culture, requiring those who live with it to remake it constantly, over and over”) ─, the second autonomizing three indispensable thematic cores and the exercises in translation that they demand, namely, the one which is required by the plural network of (national and international, state and non-state) legal orders, the one which the judge’s modus operandi (interconnecting the world of practical controversies and legal materials) manifests and, last but not least, the one which this same judge develops whilst assuming his/her role as third (“le tiers qui triangule le différend opposant les parties [et qui traduit] (…) leurs discours dans le langage de la loi commune”) ─ without forgetting that this thirdness (also as a fonction tièrce “internalized by legal subjects”) is precisely the feature which distinguishes Law, its discourses and practices (Le droit ou l’empire du tiers).

2) On the other hand, we have the blossoming of a wide range of discourses on marginalised identities (sometimes even on marginalised bodies), the core of which is undoubtedly composed of narrative outsider jurisprudences and community-building counterstorytelling (to use the well-known formulae proposed respectively by Mari J. Matsuda and Richard Delgado). This remarkable multiplication of perspectives and academic fields (going from Feminist Jurisprudences to Critical Philosophy of Race and from LGBT-GNCCrits to Postcolonial Legal Theory) — which were opened up with the so-called third Critical Legal Scholar’s generation and go on developing a search for community or communities flowing out in the experience of incommensurable forms of life (involving gender, race, sexual orientation, economic condition, social status, practical-cultural and geopolitical provenance, health, mental and physical disability, etc) — pose certainly specific problems ─concerning the “standards” which should be used to evaluate the different uses of narrative resources (and the merits of the nfinal outcome), the challenges of intersectionality or intersectional persons (overlapping diverse identities), as well as the risk of transforming more or less persuasive counterstories into stereotyped narratives (with characters and roles that are implacably pre-determined). They offer however also an unique opportunity to discuss Law’s and legal theory’s claims to comparability. Is in fact the fragmentation of meanings, semantic values and performative models provoked (or aggravated) by those approaches compatible with the claim for an integrating context (and its tertium comparationis) or does, on the contrary, this fragmentation (in its narrative intelligibility) prevent or frustrate the attempt to recognise an authentic inter-discourse and, with this, the aspiration to treat law as the “empire” of thirdness?

Participants are invited to explore both these lines of development and their internal possibilities, as well as to discuss their reciprocal intertwinement and their dialectical tensions, which means also projecting them in specific contemporary societal challenges, such as those which involve the morality of political correctness, the juridical relevance of hate speech, the digitization of life, the climate justice (or the climate emergency), the biopolitics of human and trans-human.

Abstracts of 300 words (max.) should be submitted by April 18th 2022 to José Manuel Aroso Linhares (linhares@fd.uc.pt) and Ana Margarida Gaudêncio (anagaude@fd.uc.pt) with participation decisions made by April 26 th. Selected papers will be invited for publication. For communication reasons it is strongly recommended English as working language. However, communications in Castilian, French, German, Italian and Portuguese are also possible (provided they are always accompanied by an abstract in English).

We intend to hold the conference as a full “in-person”, eventually as a hybrid event. The preference concerning the participation mode should be clarified in the e-mail which sends the abstract.

The basic registration fee* (concerning “in person” presentations) is 30€ (for professionals) and 20 (for students. including PhD candidates). Other possibilities (involving a guided tour and a dinner) will be clarified later. The information concerning payment possibilities will be available a week before the beginning of the registration period.

Posted by Emmanuel Didier at 4:43 PM No comments: