As you know, the Juris Diversitas Blog has tended to publish only informational blogs. We hope, over the next year, to branch out to include more opinion-oriented and scholarly posts, online discussions, etc. With that in mind, we're happy to post the following contribution from Tomaso Ferrando (PhD Student, Sciences-Po Law School):

Only few months ago, the social image of prominent transnational enterprises such Apple and HP was threatened by media reporting several violations of labor rights by Foxconn, the main contract manufacturer for such electronics companies, whose factories are located in the People's Republic of China. In the light of the potential commercial repercussions, Apple and Foxconn invited the Fair Labor Association (FLA) into the factories where Apple’s products are built, relying on the fact that Apple had just joined the Association in January 13. After more than a month of investigation, the FLA 'revealed serious and pressing noncompliances with FLA’s Workplace Code of Conduct, as well as Chinese labor law' and claimed that both Apple and Foxconn 'have agreed to ongoing assessments by FLA in order to ensure that labor practices meet FLA standards and remain in compliance for the long term.' From a legal perspective, that means that a private agreement concluded between the two enterprises and a private association would determine – if enforced and respected - the substitution of the current Chinese working standards with the legal architecture privately defined by the FLA, i.e. the creation of an ad hoc intra-national legal order whose boundaries will be represented by the Foxconn's gates.

The following information on the German Law Journal was recently circulated:

We are pleased to announce that today, on 1 June 2012, the June issue of the German Law Journal, Review of Developments in German, European and International Jurisprudence, is now available at www.germanlawjournal.com. Back to a publishing schedule which we maintained for the larger part of the Journal's decade-plus long existence, we are also faithful to tradition in another way. The contributions to the Journal continue to come from all over the world, they are frequently covering intriguing legal questions at the intersection of domestic and comparative law, transnational and international law and legal theory, and - most importantly - they are written by both emerging and highly established scholars alike. As such, the Journal remains 'young', despite its own and its longer-standing editors' inevitable ageing. So, that's a happy moment to mark and an important moment to reflect on the nature of scholarly publishing, collaboration, on the identification of issues and trends, on making a point, on unsettling the apple-cart and on engaging with others and with the developments around us. We are, thus, immensely grateful to our authors and to our editors, recently joined by a group of wonderfully bright and critically thinking scholars at earlier stages of their legal careers.


Please allow us, in that regard, to alert you to a new submission process for the Journal. The Journal welcomes the submission of articles, commentary, reviews and case-notes on subjects relevant to German, European and International Law. All new submissions ought to be sent to GLJ-Submit@wlu.edu.  As always, submissions will be presented to the editorial board for blind/peer-review. We hope to be able to provide a publication decision within a few weeks after we receive a submission, but sometimes it takes a little longer. The editors receive submissions with the understanding that the contents are original, unpublished material and have not been submitted for publication elsewhere. Authors intending to republish content, or to use previously published material as part of an article, must indicate this at the time of submission. Thank you for your interest in the German Law Journal.

In analysing 'wrongful life' cases, comparative law is used extensively. This article examines these wrongful life cases, especially in light of the contradicting outcomes in different jurisdictions across the world, with the Dutch Kelly case and the South African decision in Stewart v Botha as its main examples. I will test the hypothesis that it is not so much the outcomes and (more importantly) the arguments found elsewhere through the comparative law method that are decisive in highly debated cases like those concerning wrongful life, but that instead it is something else that decides the issue, something I would define as the cultural background of, or the legal policies within a tort law system.

NOTICE: Ruskola on the East Asian Legal Tradition and The Cambridge Companion to Comparative Law 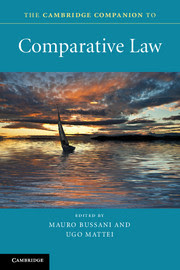 The book will be published in August. Its contents include:

Editors' preface. Diapositives v. movies: the inner dynamics of the law and its comparative account: a companion M. Bussani and U. Mattei
Read more »
Posted by Unknown at 9:50 PM No comments:

Many of our members, including me, are in the ESCLH or involved in the new CLH.

The journal will be published, both online and in print, twice a year, appearing in the spring and the autumn. The first issue will appear in Spring 2013:

To submit an article please contact Editor Seán Patrick Donlan (sean.donlan@ul.ie) or Articles Editor Heikki Pihlajamäki (heikki.pihlajamaki@helsinki.fi). The optimal length for articles is between 7500 to 15000 words, including footnotes. Shorter submissions will be considered for our 'Short Articles' section. All articles are submitted to double blind peer review.

The Hart website also has information on the Editors (both the Editorial Staff and International Editorial Board), an Email alert service of the 'Table of Contents', and subscriptions. Note that a special arrangement between the ESCLH and Hart has been made to ensure that, beginning next year, ESCLH membership fees will include a subscription to CLH.

Potential contributors should pay special attention to the ‘Notes for Contributors’ on the website. In particular, contributors whose first language is not English are strongly advised to have their papers edited by native Anglophone scholars in advance of their submission to ensure a clear presentation of their ideas and an accurate appraisal of their work.
Posted by Unknown at 2:55 PM No comments: