ANNUAL CONFERENCE AIX 2014, In and Out

Posted by Olivier Moréteau at 12:23 AM No comments:

More than 100 participants from all continents attended this two-day-and-a-half event, with three plenary sessions, 75 presentations (mostly in parallel sessions), organized with the support and sponsorship of the Faculté de droit, Aix-Marseille University, and several of its prominent research centers. 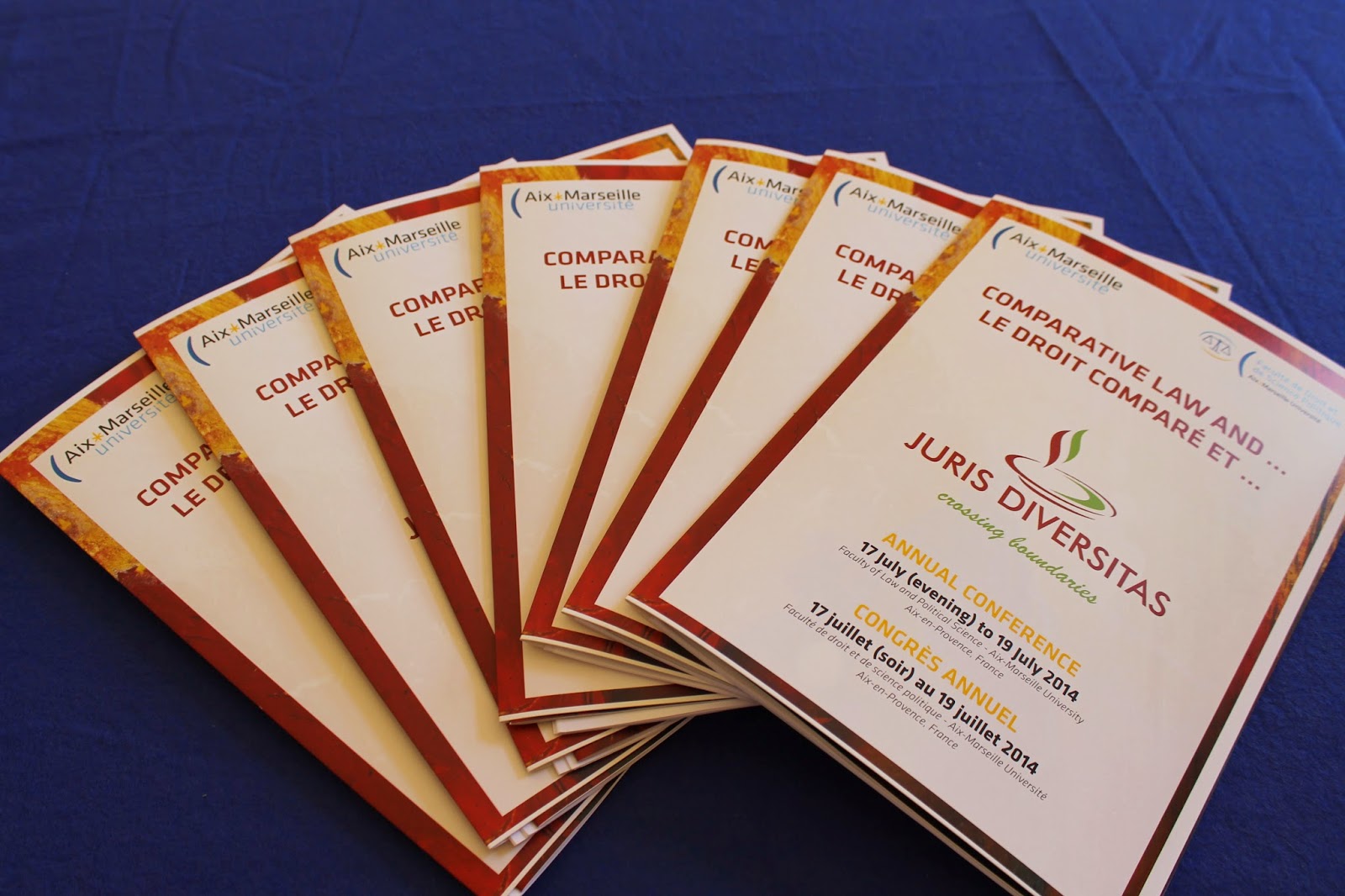 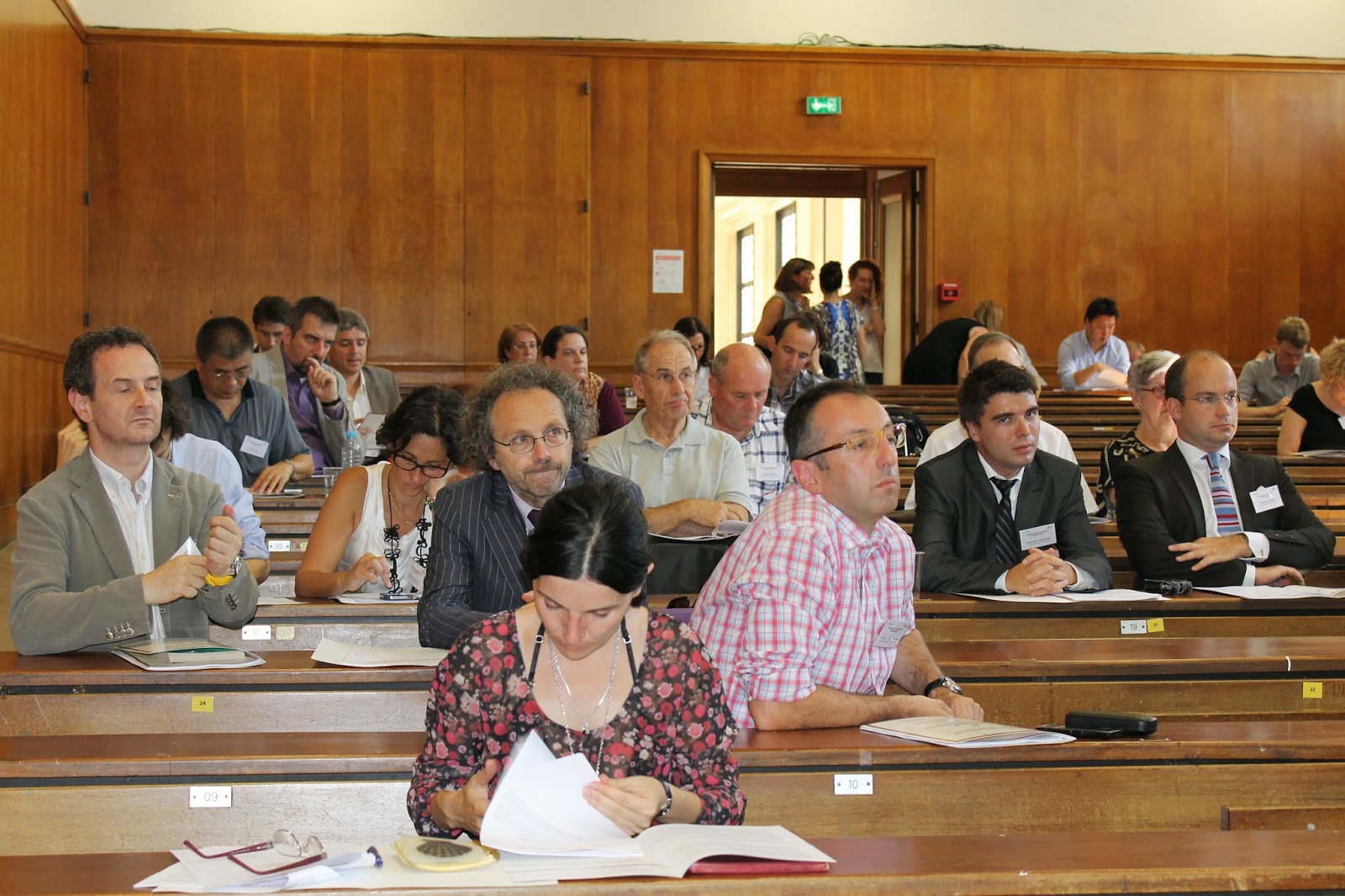 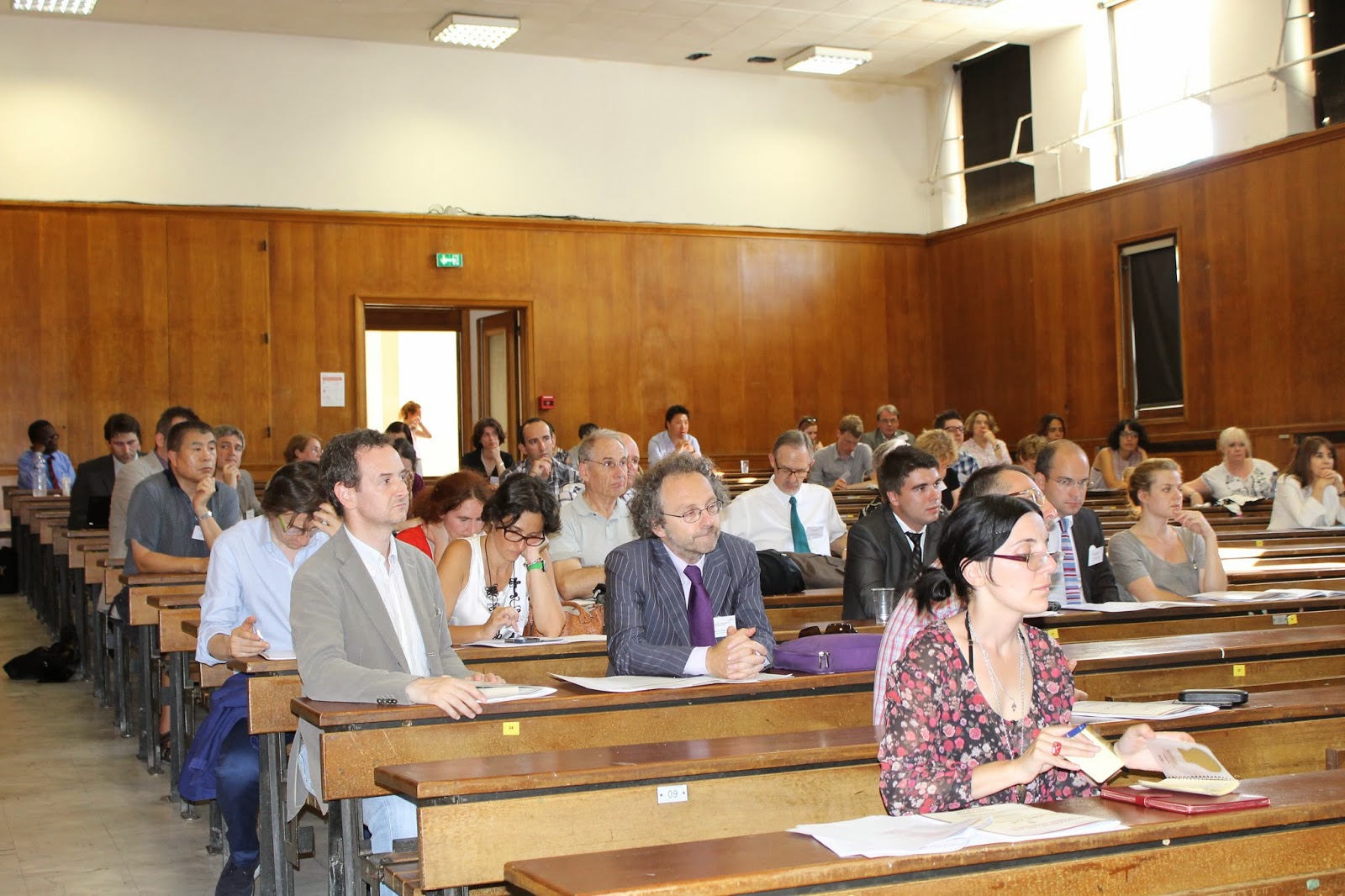 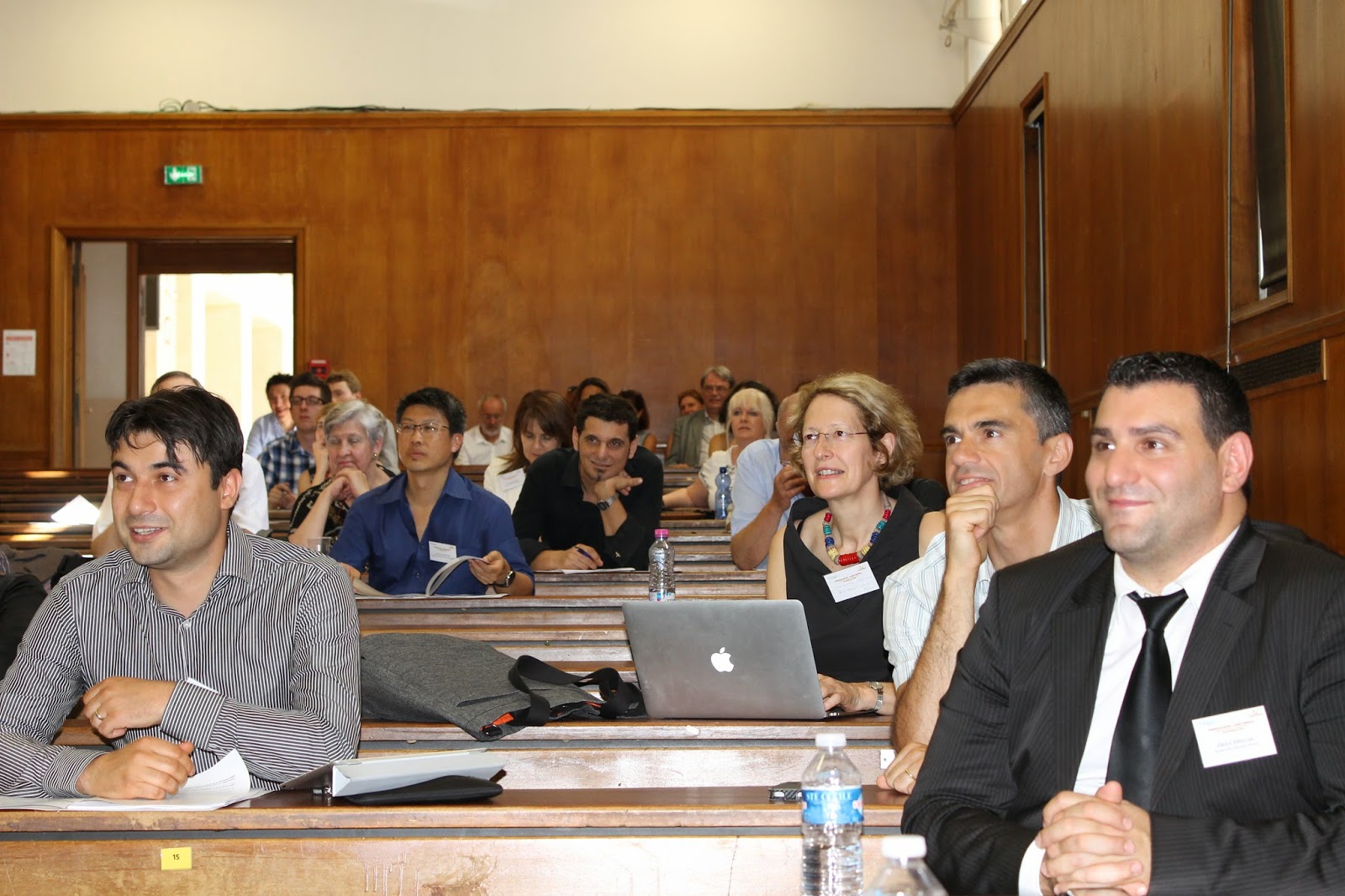 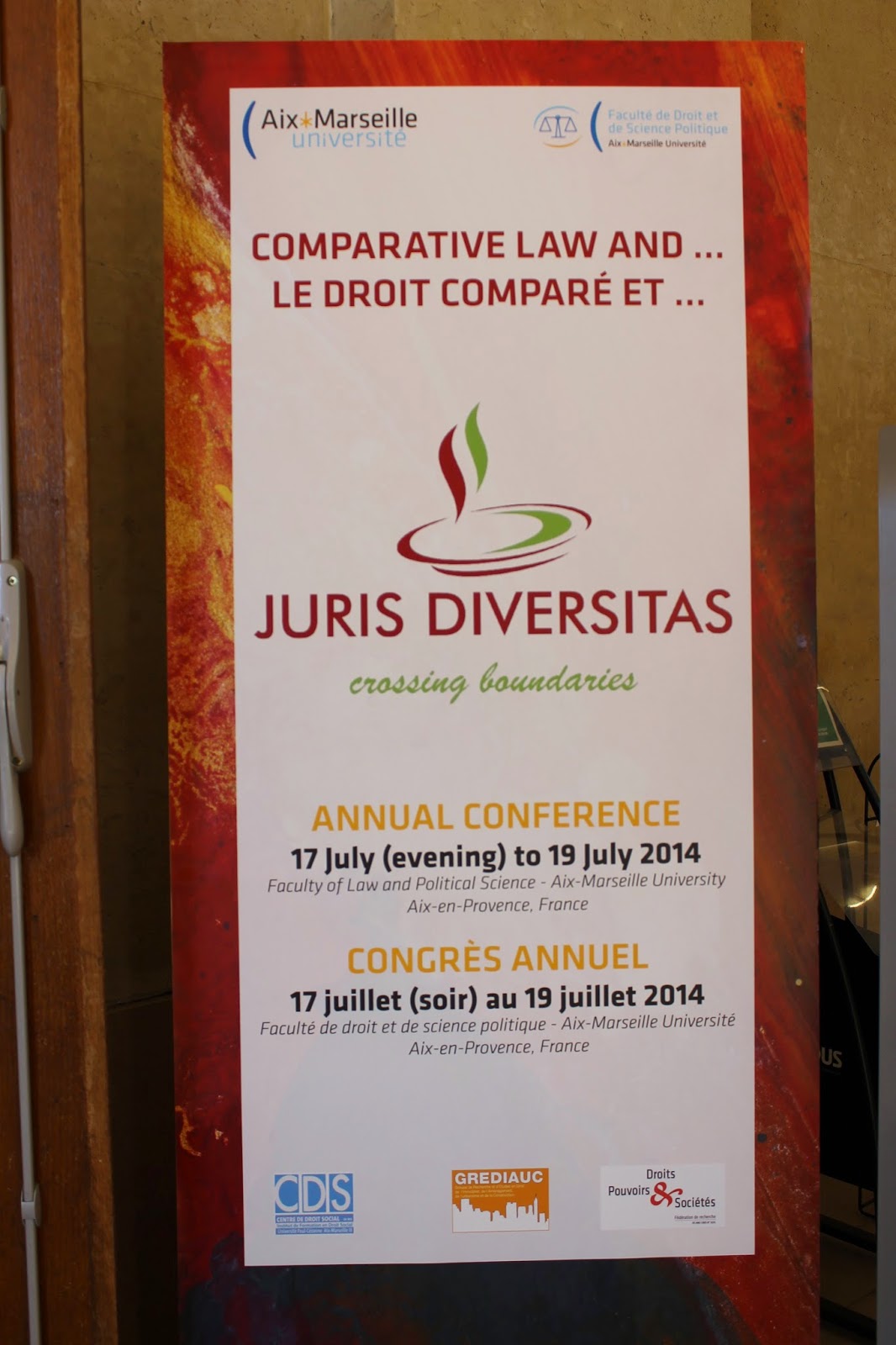 Posted by Olivier Moréteau at 12:00 AM No comments:

Prof. Alexis Bugada, Vice-Dean of the Aix-Marseille University Faculty of Law and Director of the Centre de droit social, sponsor and co-organizer of the 2014 Juris Diversitas Annual Meeting, announces that the Centre de droit social offers three post-doc 6-month contracts on the following themes: (1) Economics of the French social protection to the test migration (Economic perspectives on international social security policy) (post-doctorant économie), (2) Analysis of the political discourse on the French social protection linked to the Mediterranean (post-doctorant science politique), and (3) Measuring social inclusion of French social protection system in the migration perspective (Euro-Mediterranean area, or Anglo-american world) (post-doctorant sociologie). All interested should email centrededroitsocial@univ-amu.fr noting the theme they are interested in so that they may receive the appel d'offre/tender.

Posted by Olivier Moréteau at 11:04 PM No comments: 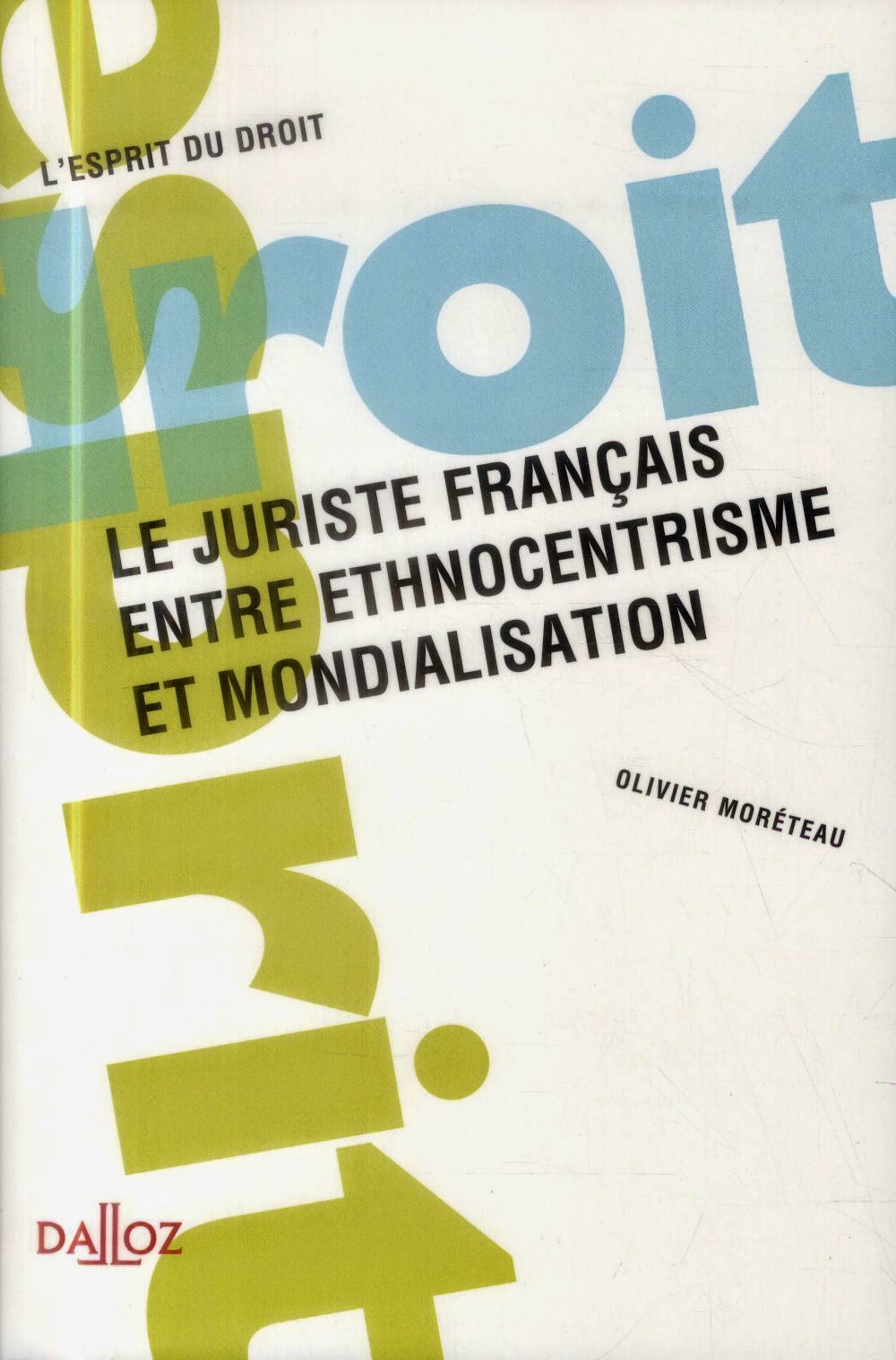 Posted by Olivier Moréteau at 10:34 PM No comments:

Springer is now offering readers of the Juris Diversitas Blog a 20% discount on books in several of its series:

To receive the discount, use discount code ‘xJDa88MbTRrcTe9’.

This offer will be added to our other discounts.
Posted by Unknown at 11:59 AM No comments:

SSRN ARTICLE: Bordering by Law: The Migration of Law, Crimes, Sovereignty, and the Mail" Free Download

A new article from the Sociale & political Philosophy eJournal

"Bordering by Law: The Migration of Law, Crimes, Sovereignty, and the Mail"
J. Resnick, Bordering by Law: The Migration of Law, Crimes, Sovereignty, and the Mail, Nomos Publishing. 2015, Forthcoming
Yale Law School, Public Law Research Paper
JUDITH RESNIK, Yale University - Law School
Email: judith.resnik@yale.edu
Law is filled with segmented narratives. The literature mapping the illegalization of the migration of peoples does not reference that many borders have become readily traversable, if not invisible, through the legalization and internationalization of subsidized mail services by cooperative government efforts. And, while the politics of migration are much debated, the post is infrequently acknowledged as either a political or a legal site. I bring together these domains not to equate the migration of persons and families with the movement of objects but rather to clarify how reliant on border crossings we are. My argument is that neither law nor land is readily bordered, and that depending on borders (alien/citizen, federal/state) as justifications for legal rules deflects attention from two major shifts during the last two centuries: one imagining the globe as a “single postal territory” and the other turning migration into a crime. In pursuit of both, governments expanded their repertoires and capacities as providers of services – from forwarding mail to patrolling borders.

This century’s questions are whether political will can be marshaled to undo the criminalization of migration and the stigmatization of migrants and to sustain states as central sources of social ordering generating redistributive exchanges respectful of individual liberty and aiming to enhance equality. My aim is to invite attention to the utilities of government and to the project of shifting normalcies so as to probe whether states’ coordination to facilitate movements of persons seeking to cross boundaries could become a taken-for-granted government service, akin to state-subsidized inter-jurisdictional, cooperative postal systems – which are now at risk of becoming historic relics of bygone eras when governments were central.


Posted by Antonio Zuccaro at 11:55 AM No comments:

Housing and Dispute Resolution: Social wellbeing and bottom up forms of community engagement

Birmingham School of the Built Environment (BSBE)
Full fee waiver plus a stipend of £13,863!
Deadline: 24 October 2014

The housing crisis across much of Europe, and indeed other parts of the world, shows no sign of abating. The issue is particularly pressing in high-density urban settlements where the further problems of low income, immigration and lack of community engagement are often found. The solution is often deemed simply to be more housing, but this is often not achievable especially in the short term. There are further issues that are intimately linked to urban housing including anti-social behaviour and the creation of sustainable communities.  Rather then than focussing purely on material housing it is a question on focussing on tenant wellbeing through empowerment and engagement.

This PhD will be based around an empirical study of the attitudes and perspectives of tenants in urban Birmingham. It will also seek to examine the views of key stakeholders such as housing associations, charities and legal experts. It aims to consider the question of housing from a social science perspective by considering the concept of ontological security and drawing on geographical theory in attempting to examine the sense of place.

Candidates should have a good first degree (2:1 or above) and ideally a Masters and experience of qualitative research would be helpful.  Candidates must be able to demonstrate good communication skills, both for undertaking the research and disseminating its results. We also expect him/her to contribute to BSBE’s overall strategy of exploring cutting edge practices and research informed teaching.

For further information and informal enquiries please contact Julian Sidoli del Ceno (Julian.sidolidelceno@bcu.ac.uk)
Posted by Unknown at 11:14 AM No comments:

The Younger Comparativists Committee of the American Society of Comparative Law is pleased to invite submissions for its fourth annual conference, to be held on April 16-17, 2015, at Florida State University College of Law in Tallahassee, Florida.  The purpose of the conference is to highlight, develop, and promote the scholarship of new and younger comparativists.

Submissions will be accepted on any subject in public or private comparative law from scholars who have been engaged as law teachers, lecturers, fellows, or in another academic capacity for no more than ten years as of June 30, 2015.  We will also accept submissions from graduate students enrolled in masters or doctoral programs.

To submit an entry, scholars should email an attachment in Microsoft Word or PDF containing an abstract of no more than 750 words no later than November 1, 2014, to the following address: ycc.conference.2015.abstracts@gmail.com.  Abstracts should reflect original research that will not yet have been published, though may have been accepted for publication, by the time of the conference. Abstracts should also include the author’s name, title of the paper, institutional affiliation, contact information, as well as the author’s certification that she/he qualifies as a younger scholar. Graduate students should identify themselves as such.