NOTICE: Dupret on Adjudication in action and Practices of truth

The first, published by Ashgate, is Adjudication in action: an ethnomethodology of law, morality and justice:

Adjudication in Action describes the moral dimension of judicial activities and the judicial approach to questions of morality, observing the contextualized deployment of various practices and the activities of diverse people who, in different capacities, find themselves involved with institutional judicial space. Exploring the manner in which the enactment of the law is morally accomplished, and how practical, legal cognition mediates and modulates the treatment of cases dealing with sexual morality, this book offers a rich, praxeological study that engages with 'living' law as it unfolds in action.
Inspired by Wittgenstein's later thought and engaging with recent developments in ethnomethodology and conversation analysis, Adjudication in Action challenges approaches that reduce the law to mere provisions of a legal code, presenting instead an understanding of law as a resource that stands in need of contextualization. Through the close description of people's orientation to and reification of legal categories within the framework of institutional settings, this book constitutes the first comprehensive study of law in context and in action.
The second, published by the John Benjamins Publishing Company, is Practices of truth: an ethnomethodological inquiry into Arab contexts: 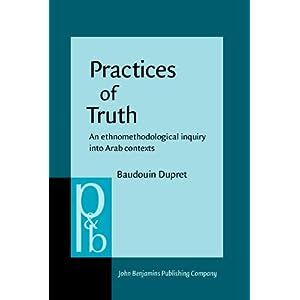 The claim of this book is that truth is a matter of language games and practical achievements: it is a “member phenomenon”. To document this statement, it proceeds to the investigation of instances of truth-related practices in various Arab contexts. Bearing on the constitution of actions and events, on what is factual or objective, on predictability, consequentiality, intentionality, causality, and on the many ways people orient to them, such a varied set of questions appears thoroughly moral. The praxeological respecification this book undertakes leads to important considerations regarding the question of morality in ordinary reasoning, and the categories and categorizations on which that morality is based: moral values are publicly available; morality has a modal logic; moral values and conventions have an open texture; objectivity is a practical achievement carried out by members of society; the moral order is an omnipresent, constitutive characteristic of social practice.
Posted by Unknown at 11:31 PM No comments:

CALL FOR PAPERS: Mid-Winter Meeting of the Canadian Law and Society Association

A Call for Papers has been issued for the Mid-Winter Meeting of the Canadian Law and Society Association:

The Canadian Law and Society Association’s (CLSA’s) Mid-Winter meeting will take place at the University of Ottawa on January 27th and 28th, 2012 and will be co-hosted by the Justice Studies and Research Laboratory at the University of Ottawa. The mid-winter meeting provides an opportunity for members to get together to discuss professional and intellectual issues in a small, informal context. All presentations will be held on Friday, January 27th, 2012 and the Board meeting will be on Saturday, January 28th, 2012. (Board members are asked to attend since this is the main Board meeting of the year.)

The Fiftieth Anniversary Conference of Berkeley's Center for the Study of Law and Society looks very exciting: THE FUTURE OF LAW AND SOCIETY
Bancroft Hotel
November 3-4, 2011
The response to the announcement of the Center for the Study of Law and Society's 50th Anniversary Conference on the Future of Law and Society has been enthusiastic. To accommodate the growing numbers, the Conference sessions have been relocated to Booth Auditorium at Berkeley Law, just up the block from the Bancroft Hotel.
For those of you who have not yet registered, you are invited and encouraged to register (free) at the Conference. Online registration has been closed because Thursday dinner and Friday lunch have reached room capacity (at the Bancroft Hotel). But there is plenty of room at all the conference panels in Booth on Thursday and Friday, and you are welcome to partake of the continental breakfast on Friday and attend the Closing Reception on Friday. We hope to see you there.