The deadline for proposals to the ‘Mediterranean Legal Hybridity' symposium has been extended to Monday, 5 April 2010.

The symposium will begin on the afternoon of Friday, 11 June 2010 with a plenary speech, but most papers will be presented on Saturday, 12 June 2010. Our primary theme is the investigation of legal and normative diversity across the Mediterranean. A secondary theme is the establishment of dialogue between comparative lawyers and other disciplines.
While our primary focus is on the region, we will consider any proposals on the mixtures and movements of state laws and other norms. Among others, anthropologists, geographers, historians, and sociologists are all encouraged to participate.
An excursion into Valletta or Mdina is also being planned for Sunday, 13 June 2010.
Those interested in making a presentation (twenty minutes long) should email Dr Seán Patrick Donlan (sean.donlan@ul.ie) with a short (250 word) proposal. The conference fee is €100.
Details on the symposium venue and information on accommodation will be posted next week.
Posted by Unknown at 3:29 PM No comments:

The site's links page contains numerous useful links to organisation dedicated to regional and border studies.
Posted by Unknown at 9:23 AM No comments: 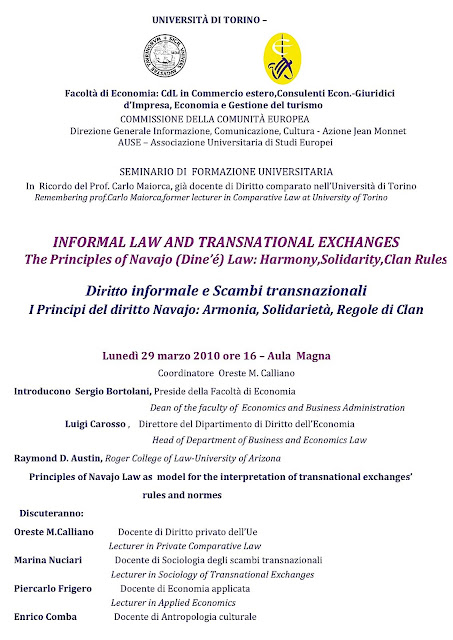 Posted by Unknown at 8:52 AM No comments:

Dr Prakash Shah, Senior Lecturer in the Department of Law, Queen Mary, University of London has just brought Pluri-Legal to my attention.

Pluri-Legal is an e-mail discussion group on JISC mail and is devoted to issues regarding the legal accommodation of cultural, ethnic and religions minorities in Europe.
You can join by going to: www.jiscmail.ac.uk/PLURI-LEGAL
Note, too, that Dr Shah has recently posted an article, 'Inconvenient marriages, or what happens when ethnic minorities marry trans-jurisdictionally according to their self-chosen norms' on SSRN. The article will be published in the (2010) 6:2 Utrecht Law Review. The abstract reads:
This article presents evidence of a trend in British immigration law practice of denying recognition to marriages which take place trans-jurisdictionally across national and continental boundaries and across different state jurisdictions. The article partly draws on evidence gleaned from the writer’s own experience of being instructed as an expert witness to provide opinions of the validity of such marriages, and partly on evidence from reported cases at different levels of the judicial system. The evidence demonstrates that decision making in this area, whether by officials or judges, often takes place in arbitrary ways, arguably to fulfill wider aims of controlling the immigration of certain population groups whose presence in the UK and Europe is increasingly seen as undesirable. However, and quite apart from the immigration control concerns underlying such actions, the field throws up evidence of the kinds of legal insecurity faced by those who solemnize marriages under non-Western legal traditions and calls into question respect for those traditions when they come into contact with Western officialdom.
Posted by Unknown at 1:33 PM No comments:

Ashgate on cultural diversity and law

I'm embarassed to note that I've only just become aware of the Cultural Diversity and Law series published by, you guessed it, Ashgate. The Series Editor is Prakash Shah of the School of Law of Queen Mary, University of London (UK). The series' description--there's also a short interview with Dr Shah--reads:

Around the world, most states are faced with difficult issues arising out of cultural diversity in their territories. Within the legal field such issues span from matters of private law to those of public and constitutional law. At international level too there is now considerable jurisprudence attracting incisive analysis. In addition, there are several layers of legal control - from communal and religious regulation to state and international regulation. This legal pluralism, inter-legality or inter-normativity provides fascinating areas of academic inquiry that link up to cultural diversity in new and interesting ways. The umbrella of cultural diversity encompasses various population groups throughout the world ranging from national, ethnic, religious or indigenous groupings. This series particularly welcomes work that is of comparative interest, concerning both various state jurisdictions as well as population groups.
There are so far two titles in the series. The latest is Jørgen S Nielsen and Lisbet Christoffersen (eds), Shari‘a as discourse: legal traditions and the encounter with Europe (2010). The abstract reads:
This volume exposes some of the various issues raised in relation to Muslim communities in Europe by putting the intellectual and legal traditions into dialogue. It brings together a number of scholars of Shari‘a and Islamic law with counterparts from the parallel European disciplines of hermeneutics, philosophy and jurisprudence, to explore how the processes of theological-legal thinking have been expressed and are being expressed in a more or less common intellectual framework. It provides a valuable reference for all those interested in exploring how Muslims and non-Muslims view Shari‘a law, looking at ways the European legal systems can provide some form of accommodation with Muslim customs.

More information, including the extensive contributions, are available here.

Legal Practice and Cultural Diversity considers how contemporary cultural and religious diversity challenges legal practice, how legal practice responds to that challenge, and how practice is changing in the encounter with the cultural diversity occasioned by large-scale, post-war immigration. Locating actual practices and interpretations which occur in jurisprudence and in public discussion, this volume examines how the wider environment shapes legal processes and is in turn shaped by them. In so doing, the work foregrounds a number of themes principally relating to changing norms and practices and sensitivity to cultural and religious difference in the application of the law. Comparative in approach, this study places particular cases in their widest context, taking into account international and transnational influences on the way in which actors, legal and other, respond.
More information, including the extensive contributions, are available here.
Posted by Unknown at 10:00 AM 1 comment:


Catastrophes or disasters may be defined as natural or man-made events of significant magnitude causing disruption such that survivors feel deprived of normal social help. In American law, catastrophic harm includes the mass of individual losses suffered by individuals, businesses, and entities of all kind, also including environmental harm. The Federal Emergency Management Agency (FEMA), created in 1979, coordinates the response to disasters occurring in the United States while it administers prevention and organizes relief efforts. However, the system does not work top-down, since local and state governments bear the initial responsibility as first respondents. Local or state failure can cause the system not to be reactive enough, explaining the slow response after Hurricane Katrina.

Non-desirable risks tend to concentrate in earthquake, flood, or hurricane prone areas, making such risks uninsurable. Significant efforts are made at state and federal level to make catastrophic risk insurable, pooling risks and sometimes creating compensation funds, especially in the case of nuclear and terrorist risks. Rather than disrupting the market, state or federal intervention tend to create proper conditions for a market to exist where none could otherwise prosper, whilst in best cases encouraging disaster mitigation.

Given the weakness of the American welfare system by comparison to other developed countries, victims are more prone than elsewhere to look for a tortfeasor and sue. The jury system, the practice of contingent fee and the availability of class actions make American tort law a powerful pro-plaintiff system and tort law has a large impact wherever defendants can be identified. Insured victims tempted to sue are rarely overcompensated. Sophisticated solutions have been devised for the assessment of environmental damage when caused by oil pollution. Sovereign immunity may bar mass tort litigation against the federal government, for instance, for the failed flood control levees in New Orleans, but history proves that the Corps of Engineers made good proposals but had to comply with wrong political decisions.
Posted by Unknown at 9:30 AM No comments:

Gaudreault-DesBiens on legal and cultural diversity in Canada

The abstract of Jean-François Gaudreault-DesBiens (University of Montreal - Centre de recherche en droit public), 'The State Management of Legal and Cultural Diversity in Canada' has been released on SSRN. The article is included in J-F Gaudreault-Desbiens and A Dundes Renteln (eds), Cultural diversity and law: state responses from around the world (2009). The abstract reads: 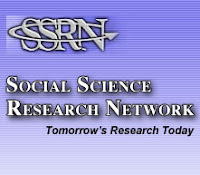 This paper provides a contextual and critical overview of how legal and cultural diversity is managed by the state in Canada. It particularly seeks to provide an account of how the state manages its interactions with other normative systems, when and only when it deems appropriate to formally interact with them, be it to merely acknowledge their existence, to influence their evolution, or to neutralize their effects.

The first part examines the genesis of the legal and cultural encounters that are still shaping Canada today. A particular attention is paid to the interactions, historical and current, between the legal traditions that co-exist in Canada. As such, its focus is mostly on state attempts at orchestrating sources of legal pluralism. The second part looks at the relative influence of different sources of law in the management of cultural diversity in Canada. After a brief examination of the treatment and impact of international law, the focus shifts to the central role that constitutional law plays in Canada as a tool for macro-managing cultural diversity. Then, some particular statutory techniques used to micro-manage particular issues are analyzed. A brief third part finally examines some particularly interesting features of the legal theorization of pluralism in Canada.
Posted by Unknown at 9:25 AM No comments: