NOTICE: American Society of Comparative Law Panels on You Tube

I came across the following series of recent panels on comparative law, part of the 2011 Annual Meeting of the American Society of Comparative Law, on Youtube:

This session addressed the objectives and contents of the basic course in comparative law. Doing so forces one to confront the fundamental questions of why students should study comparative law and whether there is an essential core to the field of which any serious student should be aware. Is the goal of comparative law to examine differences and similarities in discrete subjects of private and/or public law from which students might better understand the competing policies and rule choices in specific fields? Or, is the goal to understand competing legal systems and underlying modes of thought (e.g., common law, civil law, and non-Western traditions, such as Islamic law) from which might flow discussions of the underlying nature of law and legal order? Or, is the essential core to understand the methods by which scholars in different legal systems can compare one with another (as well as the inherent limitations on such comparisons)? How should the objectives of the course change in the future, and how should basic courses in comparative law change in to meet these goals?
Read more »
Posted by Unknown at 2:42 PM No comments:

NOTICE: Finnis on the Philosophy of Law (what else?)

The natural lawyer and legal philosopher John Finnis (Oxford/Notre Dame) has just published 'What is the Philosophy of Law?' in (2012) 1 Rivista di Filosofia del Diritto 67, part of a number of interesting papers on the topic. The abstract reads:

The philosophy of law is not separate from but dependent upon ethics and political philosophy, which it extends by that attention to the past (of sources, constitutions, contracts, acquired rights, etc.) which is characteristic of juridical thought for reasons articulated by the philosophy of law. Positivism is legitimate only as a thesis of, or topic within, natural law theory, which adequately incorporates it but remains transparently engaged with the ethical and political issues and challenges both perennial and peculiar to this age. The paper concludes by proposing a task for legal philosophy, in light of the fact that legal systems are not simply sets of norms.

The paper is available in the Notre Dame Legal Studies and Oxford Legal Studies Research series on SSRN.
Posted by Unknown at 9:48 AM No comments:

The first publication in the Ashgate Religare series has been published: Katayoun Alidadi, Marie-Claire Foblets, and Jogchum Vrielink (eds) A Test of Faith? Religious Diversity and Accommodation in the European Workplace. It's described as:

Issues of religious diversity in the workplace have become very topical and have been raised before domestic courts and the European Court of Human Rights. Examining the controversial and constantly evolving position of religion in the workplace, this collection brings together chapters by legal and social science scholars and provides a wealth of information on legal responses across Europe, Turkey and the United States to conflicts between professional and religious obligations involving employees and employers.

The contributors examine how case law from the European Court of Human Rights, domestic experiences and comparative analyses can indicate trends and reveal established and innovative approaches. This multi-perspective volume will be relevant for legal practitioners, researchers, academics and policy-makers interested in human rights law, discrimination law, labour law and the intersection of law and religion. 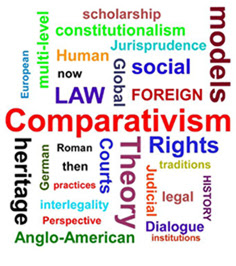 To my embarassment, I've somehow forgotten to mention the publication--a little over a month ago--of a second edition of Vernon Palmer, Mixed jurisdictions worldwide: the third legal family (2012): 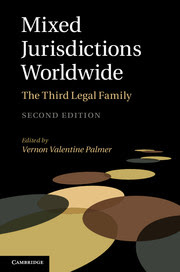 This examination of the mixed-jurisdiction experience makes use of an innovative cross-comparative methodology to provide a wealth of detail on each of the nine countries studied. It identifies the deep resemblances and salient traits of this legal family, and the broad analytical overview highlights the family links while providing a detailed individual treatment of each country which reveals their individual personalities.

This updated second edition includes two new countries (Botswana and Malta), and the appendixes explore all other mixed jurisdictions and contain a special report on Cameroon.

Part I        Introduction and comparative overview

Our members will want to own this.
Posted by Unknown at 1:44 PM No comments:

The Northern Pacific region, which includes Micronesia, the State of Hawaii, the American territories of Guam, the Commonwealth of the Northern Mariana Islands and American Samoa, and the Republics of Palau and the Marshall Islands, either follows or are heavily influenced by the Anglo-American common law tradition and statutes governing contract and sales. Islands in this region have made efforts to adopt recognized uniform international contract standards, particularly the Restatement (Second) of Contracts, but customary law and traditional rights still have a significant impact upon the development of contract and sales law creating a unique amalgam of substantive law in the Northern Pacific region.

The author notes two significant developments; 1) that the American Law Institute’s Restatements of Law have been elevated from simply persuasive authority to the rule of decision in some of these Pacific Island nations, and 2) that the anthropological implications of local custom and traditional law in substantive contract and sales law have created a unique regional amalgam.