Interpreting Law - The Role of Judges in Contemporary Democracies 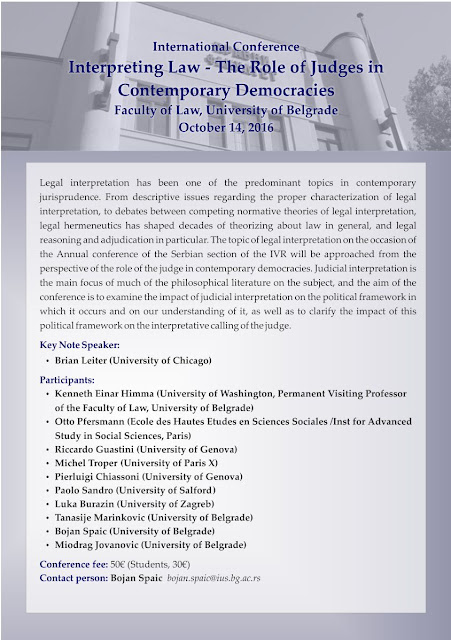 Posted by Olivier Moréteau at 11:41 PM No comments: 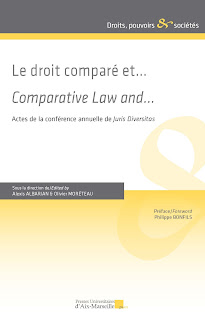 This volume gathers papers presented at the Juris Diversitas Annual Conference 2014, which was organized with and hosted by the Aix-Marseille University Faculty of Law. The general theme reveals the essence of Juris Diversitas as an international, interdisciplinary community originally composed of comparative law scholars, conversing with anthropologists, geographers, historians, philosophers, economists, linguists, sociologists, to explore the interaction of the law with all branches of human and social sciences. The chapters are arranged in sections that complete the title of the volume: comparative law and … methodology, sources, constitutions, history, liability, property, the courts, East Asia, and beyond. 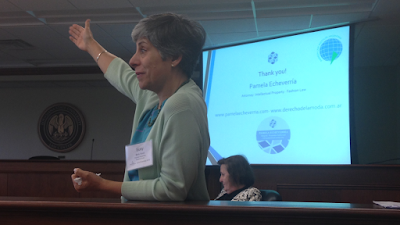 With JURIS DIVERSITAS I am crossing boundaries: I am a lawyer and accountant from Buenos Aires University, Argentine; PHD in Law from Salamanca, Spain.  Europe and Latin America. Art and Law. We have decided to share and point out the work we’ve been doing in the field of fashion law.
When talking about a creative industry, such as fashion, as we are going to show today, the most important area within fashion law is Intellectual Property.
We can start by asking a question: What is fashion law?
First: what is fashion for you? A group of designers in Buenos Aires told me these words. Expression, culture, cycle, social event. I consider that these words can define fashion. EXPRESSION: because people express many things through clothes, for example. And also it is part of culture, of the values that a society considers relevant. It expresses the times that we live in, even our individuality.
Fashion is “a form of imitation and so of social equalization, but paradoxically, iit is changing continually, it differentiates one time from another and one social stratum from another”. This is a definition from  sociology.  And Georg Simmel, its author, is a sociologist.
But for one French woman, who is one of the ten most important persons of the last century, Coco Chanel, “fashion is not only…. something is present in dresses only. Fashion is in the sky, in the street, fashion has to do with ideas, the way we live, what is happening”.
It operates both as a cultural phenomenon and as a highly complex business.
Let’s know more about the characteristics of the fashion business only in garments. Even if we consider there is fashion in music, education, books, architecture and more.
When it comes to garments, you know that fashion has different seasons and maybe you know about the fashion weeks. The most important of them stars in New York in September, and after that, the same event will take place again in London, Paris and the last one will be in Milano by October. Special weeks organized by brands like Mercedes Benz Fashion Week or by cities such as Buenos Aires Fashion Week.
Apparel manufacturers produce between four to six seasonal lines per year. This happens without taking into account the the speed of fashion phenomenon, where countless lines are produced throughout a year.
Generally, companies work on three seasonal lines at the same time: they check the sales of one, supervise the production of the second, and finally they design and cost the third one.
The fashion industry is among the most aspirational, industrious and dynamic of all industries.
It is very fragmentary. We have got designers, brands, retails, outsourcing manufacture, journalists, models and more people with their own specializations. Its supply chain is long and convoluted, and often involves travelling between factories and countries, contractors and subcontractors, investors and employees.
I want to take some minutes to analyze, as the marketing professor Bracey Wilson does in Chile, the Armani Galaxy of brands to show you the complexity of the industry. First, we find ARMANI PRIVÉ. This is haute couture and exclusive. It has only one shop in Milano and two Hotels: one in Milano and other one in Dubai. Second, we find GIORGIO ARMANI or ARMANI COLLECTION and its aspirational concept. Third, we find EMPORIO ARMANI for young people. Four: A/X ARMANI EXCHANGE for football players. And ARMANI JEANS for big stores, ARMANI juniors and Armani Home. And we can find the same Galaxy of brands in Ralph Lauren Group of companies.
Luxury fashion lasts four months, Fashion Basic only six, and Basic Basic Fashion where you find T-shirts and underwear, which lasts the whole year.
And also, you have different sizes and different colors. A typical jeans manufacturer will sell as many as 10,000 to 20,000 jeans for example. And a big manufacturer:  one million.
So the economic impact is very important. Let’s see the numbers: one trillion US dollars all around the world, all along the year. 20% of this is luxury market and 0,60% is eco luxury.
That is fashion…., but what is law? Law is rules.
When we refer to fashion, most of the rules are Intellectual Property ones, as the ones we find in trademark law, trade dress, patents, copyright. But there are other rules, for example, how to set up companies, commercial agreements, human rights (we think of this when we see a extremely thin model), contemporary slaves (when we see children working at a factory), pollution (when we look at the water disposition). The economic, political and cultural issues associated with the production are complex and the consumption of fashion impacts upon all sectors of law.
Many sciences take fashion as an object of study but Law centers have not studied it well enough. We do not expect to seek new legislation. We want to study the rules with a different glass: a fashion glass. We want to study the rules from all around the world because they are different. We started these studies in Argentina three years ago but it had already started in US back in 2007 with Susan Scafidi at Fordahm University.
As a consequence of our commitment with this study, we set up a non profit organization: Fashion law Institute Argentina. Link to our work.
Bibliography:
Posted by Olivier Moréteau at 5:05 PM No comments: