The 2013 UK IVR Annual Conference - Legal Theory and Legal History: A Neglected Dialogue? – will be held from 12-13 April 2013 in the Law Building of Queen Mary, University of London. The IVR is the International Association of Legal and Social Philosophy.

An extensive and exciting programme has been prepared and the conference description reads:


The 2013 annual conference of the UK Branch of the IVR is designed to bring together legal theorists and legal historians (including historians of legal theory and political thought) in an attempt to facilitate and encourage dialogue between the two disciplines.
Apart from some notable exceptions, much of contemporary legal theory is uninformed by history, including legal history. This is deeply regrettable, for legal theories may be vastly improved by being informed, and perhaps more importantly, challenged by historical contexts. Theories of law, one might say, are better if they are forged at the coal-face of historical research. Similarly, one could argue that legal histories are better when they draw on, and themselves contribute to, the conceptual resources of legal theory.
Somewhat more radically, if one agrees law does not have a nature, but a culture, then one must account for how the culture of law changes, and has changed, over time. This, by necessity, demands a historically-informed methodology. Similarly, the problem of change is an unavoidable one in legal theory, whether that be change in legal regimes or changes in certain areas of the law – here, again, the resources of history, including the philosophy of history, are invaluable. Putting things a little more colourfully, one could say that legal ideas cannot but be understood historically.
Further, legal theory has, of course, its own history: legal theories are not disconnected islands, but rather interventions in a long series of dialogues and polylogues amongst theorists. As many have observed, and described, legal theory’s history needs to be informed not only by such dialogues and polylogues amongst theorists, but also by awareness of the theorist’s immersion in political, economic and other conditions of his or her time and place – there, once more, a serious engagement with history is important.

Authors are being sought for the Juris Diversitas Book Series:

Spread the word!
Posted by Unknown at 3:55 PM No comments:

For those members who attended last May's conference on Mixed Legal Systems, East and West: NewestTrends and Developments in Malta, I found the following photograph posted on the Euro-Mediterranean University (EMUNI) website: 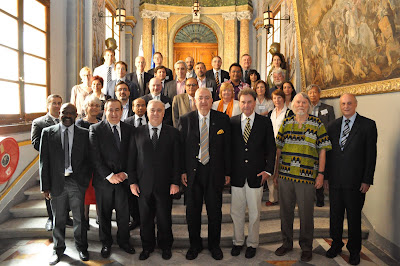 The conference was co-organised by The Protection Project at the John Hopkins University School of Advanced International Studies (SAIS), the World Society of Mixed Jurisdiction Jurists, and the Tulane University Law School Eason Weinmann Center for Comparative Law.
Posted by Unknown at 2:48 PM No comments:

NOTICE: Schiavone on The Invention of Law in the West

The English translation of Aldo Schiavone's The invention of law in the West was published earlier this year. The publisher notes:

Law is a specific form of social regulation distinct from religion, ethics, and even politics, and endowed with a strong and autonomous rationality. Its invention, a crucial aspect of Western history, took place in ancient Rome. Aldo Schiavone, a world-renowned classicist, reconstructs this development with clear-eyed passion, following its course over the centuries, setting out from the earliest origins and moving up to the threshold of Late Antiquity.

The invention of Western law occurred against the backdrop of the Roman Empire’s gradual consolidation—an age of unprecedented accumulation of power which transformed an archaic predisposition to ritual into an unrivaled technology for the control of human dealings. Schiavone offers us a closely reasoned interpretation that returns us to the primal origins of Western legal machinery and the discourse that was constructed around it—formalism, the pretense of neutrality, the relationship with political power. This is a landmark work of scholarship whose influence will be felt by classicists, historians, and legal scholars for decades.
Posted by Unknown at 11:57 AM No comments:

Volume 8 of the Annual Review of Law and Social Science is now available online.

View the full Table of Contents for Volume 8.

The 23 reviews in this volume strive to enhance the understanding of the complex connections between law, culture, social structure, and society. Topics in this volume include behavioral ethics, the study of judicial decision making, emotion and the law, bullying, the legal history of money, contracts, and the regulation of sex work.
Posted by Unknown at 11:06 AM No comments: