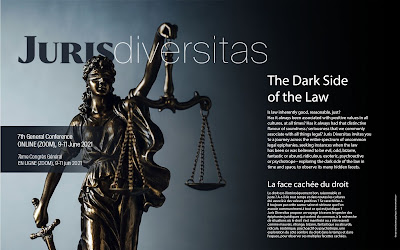 With the General Conference on The Dark Side of the Law (La face cachee du droit) to be organized online on June 9-11, Juris Diversitas reopened the call for papers.
Panel proposals and interdisciplinary presentations are strongly encouraged, as is the participation of doctoral students and scholars from outside of the discipline of law. While parallel sessions featuring three presentations of twenty-minute each will be the pattern, more creative arrangements are encouraged.
Proposals should be in English or in French. Proposals of circa 250 words (or 1000 words for panel proposals with three or more speakers) should be submitted to Professor Salvatore Mancuso at: smancuso63@yahoo.it by February 28, 2021 (tell us if you need more time), with a short biography paragraph listing major or relevant publications. Make this a single Word document with minimal formatting, so that proposal and biography can be copied easily into the conference program.
Posted by Olivier Moréteau at 7:20 PM No comments:

This is to confirm that the General Meeting of our Association is scheduled for this coming Saturday, February 27, 2021, at 17:00 Central European Time (UTC/GMT +1), also known as JDT (Juris Diversitas Time) or Swiss time, since Juris Diversitas is registered as a Swiss association and has its seat in Lausanne.

No election will be conducted during the meeting, as the offices of President, Vice Presidents (two offices), General Secretary, and Treasurer are not contested. The current officers nominated themselves for a new term (Constitution, art. 9: “Where only a single nomination is received, the person nominated is deemed elected”). The Election Officer will also announce the nomination of two additional members for Communication. One may be appointed to the Executive Committee (Constitution, art. 8: “The President and Vice-Presidents may also collectively appoint up to two other members to the Executive Committee for specific duties”).

Here is the Agenda of the General Meeting:

It is anticipated that the General Meeting will not exceed one hour.

Only Members confirming participation, by email to Christa.Rautenbach@nwu.ac.za before the beginning of the meeting, will receive the Zoom Link to participate at the General Meeting.

We look forward to meeting you this coming Saturday and encourage your active participation,

For the Executive Committee,

Posted by Olivier Moréteau at 7:15 PM No comments: