Organized by the Association for Political and Legal Anthropology (APLA) the "Happy hour Salon" will take place on Wednesday, December 3rd, 6-8 pm
Click here to view the brochure of the event.
Networking, drinks, appetizers, and an inter-disciplinary panel about how anthropological knowledge is used and understood beyond the discipline, especially in policy, law, and politics.

Posted by Antonio Zuccaro at 1:01 PM No comments:

CALL FOR TRACK PROPOSALS:Inequality, Equality, and Difference Call for Tracks and Track Organizers

The 2015 conference of the Society for the Anthropology of North America (SANA) will take place April 16-18 at John Jay College of the City University of New York with the theme “Inequality, Equality, Difference” (see below). The conference will be organized around several tracks, each comprising two days of sustained di
scussion and analysis around issues of key importance to North American society. We are now seeking proposals from individuals and groups to lead and develop tracks, which should relate to the overall conference theme.

Track Editors will each design two days of programming that creates opportunities for 15-45 conference participants. They will work closely with SANA leadership, as they recruit some submissions based in their own networks and reserve slots for submissions solicited through a forthcoming Call for Papers. We encourage themes that are broad enough to speak to an array of thinkers but specific enough to foster deep and coherent inquiry. In addition to standard paper panels, track organizers are invited to explore alternative formats for sessions such as:  roundtables; response panels to previously-circulated papers; interlocutor sessions with informants or activists; keynote talks; keyword sessions; and field trips. Track editors may want to encourage pre-conference interactions (e.g., circulated papers, thoughts, shared documents, postings, etc.) so as to make conference interactions as substantive and productive as possible. The conference, perhaps best conceived as a kind of mini-school, is cumulative. It works best when participants make connections between sessions and thematic discussions build over the course of the two-day engagement. Each track should conclude with a meeting to identify emerging themes, keywords and observations that can be shared with all conference participants at the closing session.
Proposals are accepted from everyone from graduate students to senior faculty and should include:

• Program Ideas and Preliminary Structure (200-300 words): A proposal (as specific as possible) about the exact form of the two days of programming (roughly two 6-hour days). Priority is given to novel  organization and potential for active involvement of all track participants.

• Recruitment Strategy (150-200 words): As specific a plan as possible for recruiting participants, including names and abstracts of potential/confirmed participants. Please remember: several slots will likely be added once abstracts are received from the general Call for Papers. Priority is given to inclusive proposals that welcome a range of participants.

Proposals should be submitted as an attachment and in-line text in an email to Michael Polson, Conference Chair, at sanaconference2015@gmail.com by November 14. Questions may also be directed to this email. Decisions will
be made shortly after the AAA conference in December after which a Call for Papers will be circulated.

Inequality has recently found its way back into popular discourse. Buffeted by economic and ecological crises and haunted by a welfare-turned-surveillance state, many have come to doubt the ability of the present social  system to produce an equitable, sustainable society. This doubt undergirded social movements from the Right and Left, with widely ranging demands, and has in turn been taken up particularly by a liberal economic, political, and
intellectual “establishment.” Some see a genuine opportunity to reduce and eliminate inequality while others see a cynical rearguard defense of an unequal system in crisis.

North American anthropologists have historically had a great deal to say about inequality. From bodies to body politics, inequalities can be made highly visible for radical or conservative aims or effaced under other logics of difference and power (e.g. “national security,” “public safety,” “economic growth”). Inequality can be many things: lived experience, social metrics, an administered and organized system of difference, a deviation from an ideal state of equality, a legal criteria, a problem in need of activist or institutional intervention. Inequality, in these definitions, doggedly and systemically persists—as does the belief in an often under-theorized equality. In this vein,

• When does inequality become legible and illegible? Through what discourses, practices, and logics? To whom? Toward what end?
• Who makes interventions to address inequality? How do these articulate with or oppose systems of rule? What rules, rulers, and rulings stabilize unequal conditions and deliver equality?
• How do frames of “inequality” and “equality” differ from other frames of difference and power, like those that separate humans from the natural world, citizens from non-citizens, states from people, able-bodied and differently-abled people, and propertied from non-propertied?
• Why do some forms of inequality—gay marriage, drug laws, healthcare and food systems—seem amenable to a degree of rectification while other systems of inequality production—voter laws, immigrant rights,
redevelopment, trade pacts, intelligence capacities, racialized policing—seem impervious to redress?
• Can conditions of inequality be something other than oppressive? How do people re-signify inequality?
• Where and what is equality?

In this conference, we aim to ferret out how anthropologists frame inequality, equality and difference, how these frames inhere in society, and what realities they reflect and refract.

In recent decades, justice has been overshadowed as a subject of concern to scholars of Africa by vast literatures centring on rights, crime, punishment, policing and social order. This neglect of justice is striking given the increasing presence of international justice institutions, such as the International Criminal Court, on the African continent and the remarkable diversity of legal structures of justice. Across Africa, complex pluralities of ‘customary’, religious, state, and transnational justice regimes interact on what is often contested terrain. This interdisciplinary conference will place the past and present negotiation of competing notions of justice under scrutiny, with the aims of:

*      Moving beyond currently dominant themes in socio-legal studies of Africa by asking broader questions about the aims and aspirations of those engaging with formal, informal or ‘customary’ law, legal reform, and legal institutions.
*    Exploring the potential of a focus on justice to overcome limitations associated with the study of human rights, not least their questionable resonance with the vernacular concerns of African citizens. And at the same time, probing the relationship between rights and justice.

*      Considering the conceptual possibilities of justice as a means of bypassing contested notions of legal pluralism for understanding intersections of local, national and international legalities.

*       Remaining alert to what a focus on justice might obscure or exclude. How, for example, does the language of justice relate to concerns about power and inequality?

*      Gathering together scholars from a variety of disciplines whose work converges on issues of justice in Africa and whose projects have not previously been brought into conversation.

The focus of the conference is on the many and varied actors pursuing visions of justice in Africa – their aspirations, divergent practices and articulations of international and vernacular idioms of justice. We will bring together topics of research that are at the cutting edge of contemporary scholarship across a wide range of disciplines, including activism, resource extraction, international legal institutions, and post-conflict reconciliation. Our engagement will be both empirical and theoretical: we aim to grapple with alternative approaches to the concept of justice and its relationships with law, morality, and rights. The keynote address will be given by Professor Kamari Maxine Clarke.
We welcome papers from a range of disciplines, including - but not limited to - anthropology, history, law, criminology and politics. In order to allow time for discussion, presentations will be limited to 20 minutes. We have limited funding to contribute towards the travel costs of a junior scholar based in an African University, but are otherwise unable to fund delegates’ travel and accommodation. We will cover registration costs and conference meals for all speakers, and can provide advice about accommodation in Cambridge.

To apply please send a 300-word abstract to pursuingjusticeinafrica@gmail.com by 28 November 2014.
Posted by Antonio Zuccaro at 12:46 PM No comments:

Email ThisBlogThis!Share to TwitterShare to FacebookShare to Pinterest
Labels: Call for Proposals

BOOK: Tuori on Ancient History and Legal Realism in the Making of Legal Anthropology 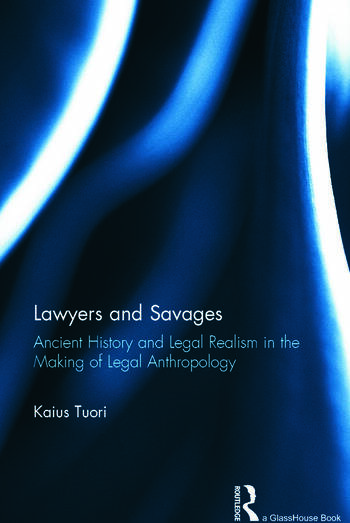 An exciting new book by Kauis Tuori has been published by Routledge.
Lawyers and Savages: Ancient History and Legal Realism in the Making of Legal Anthropology
Legal primitivism was a complex phenomenon that combined the study of early European legal traditions with studies of the legal customs of indigenous peoples. Lawyers and Savages: Ancient History and Legal Realism in the Making of Legal Anthropology explores the rise and fall of legal primitivism, and its connection to the colonial encounter. Through examples such as blood feuds, communalism, ordeals, ritual formalism and polygamy, this book traces the intellectual revolution of legal anthropology and demonstrates how this scholarship had a clear impact in legitimating the colonial experience. Detailing how legal realism drew on anthropology in order to help counter the hypothetical constructs of legal formalism, this book also shows how, despite their explicit rejection, the central themes of primitive law continue to influence current ideas – about indigenous legal systems, but also of the place and role of law in development.
Written in an engaging style and rich in examples from history and literature, this book will be invaluable to those with interests in legal realism, legal history or legal anthropology.
Posted by Unknown at 1:02 PM No comments:

A new issue of the Annual Review of Law and Social Science, vol. 10 (November 2014) has just been published. The table of contents follows:

Posted by Antonio Zuccaro at 11:50 AM No comments:

“Comparative Law: From Antiquity to Modernity”

The Irish Society of Comparative Law (ISCL) and the School of Law of the University of Limerick are pleased to announce the sixth annual conference of the ISCL to be held in Limerick on 5-6 June 2015. The ISCL held its first annual conference here in 2009.

The conference organisers encourage proposals which have both comparative and historical elements. Submissions on any era of legal history will be considered, as will papers on comparative and historical methodologies. However, any comparative topic may be proposed, eg private law, criminal law and criminal justice, public or constitutional law, legal education, etc. In addition, proposals on European or International law will also be considered.

The deadline for receipt of proposals is Friday, 30 January 2015. Proposals by both members and non-members, as well as by professional academics and graduate students, are welcome.

Proposals should be short (250 words) and sent to the Conference Organiser, Dr Laura Cahillane at ISCL2015@gmail.com . Presentations will be twenty minutes long.

The Conference fee will be €50 for members of the ISCL and €100 for non-members. (Membership fees are €50, student membership is free). The ISCL regrets that it cannot cover travel or accommodation expenses.

Additional information will be posted at www.irishsocietyofcomparativelaw.blogspot.com.

The ISCL was established in June 2008 and is recognised by the International Academy of Comparative Law. The ISCL is open to those interested in Irish and comparative law. Its purpose is to encourage the comparative study of law and legal systems and to seek affiliation with individuals and organisations with complimentary aims. Queries should be directed to niamh.connelly@tcd.ie.
Posted by Unknown at 3:07 PM No comments: