Religious Marriages in the Mediterranean 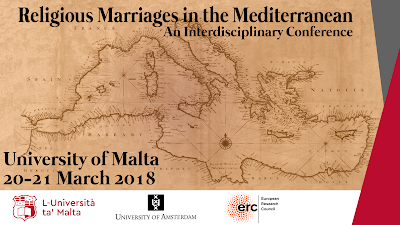 Religious Marriages in the Mediterranean

Venue and date: Mediterranean Institute, University of Malta, 20-21 March 2018 Within Mediterranean settings, religious marriage has functioned for centuries, together with conversion, as a means both of formal social incorporation and of exclusion of outsiders in relation to religiously-defined officially-recognised ethnic communities. Such an approach was an integral part of the Ottoman constitution; aspects of the millet system continue to have some posthumous existence in states like Lebanon and Cyprus. Over the last century or so, the development of secular or ‘quasi-secular’ nation-states throughout the region has generally meant the replacement of religious by civil marriage within state legal systems. Whether this has occurred via silent absorption or principled exclusion of religious unions, or even by the creation of dualist systems giving civil marriage pride of place, the juridical implications have been profound and range from the complete legal marginalisation of previously dominant religious traditions to the creation of ‘protected zones’ within secular jurisdictions within which religious law can operate. Everywhere religious courts have been
side-lined and have either been completely eliminated from the formal state’s radar, or compelled to accept a subordinate position within the state judicial hierarchy. At the same time, formally secular forms of marriage with religious conceptual roots have had to serve as important gate-keepers in granting or withholding access to citizenship and legal residence in states like Greece, Malta or Spain, which have been at the forefront of Mediterranean migrant flows.

More recently unregistered religious marriages have gone through a revival, proving also to be a useful vehicle for addressing mismatches between state legislation and the matrimonial strategies of couples. Thus the Mediterranean, a point of both intersection and mixing where ideas about the ‘West’ and its ‘other’, are re-produced and transformed, has witnessed how these transitions resulted in either a tense relationship between marriages regulated by formal, state laws and religious marriages celebrated according to informal, religious norms, or on the other end of the spectrum, civil marriages and (certain) religious marriages living harmoniously side-by-side and at times also being considered synonymous.

Papers (7,000-8,000 words), will be considered for publication in a special issue of the international, peer-reviewed Journal of Mediterranean Studies (ISSN: 1016-3476), published by the Mediterranean Institute, University of Malta and available electronically through Project Muse.

Upon request, limited travel and accommodation funds (two nights) may be available for short-listed candidates who cannot apply for funding from their own universities. Please submit your request for funding with your paper proposal.

Deadline for abstract submission: 31 January 2018
Abstracts of 200-300 words are to be submitted via e-mail: i.sadegh@uva.nl with ‘abstract’
and your last name in the subject heading.

Timeline:
31 January 2018: Deadline for abstract submission
10 February 2018: Notification of acceptance
1 March 2018: Deadline for complete draft of paper between 5000 – 8000 words or a PowerPoint presentation.
20-21 March 2018: Conference hosted by the Mediterranean Institute
1 April 2018: Select participants will be invited to submit papers for consideration for publication in 2018 in the Journal of Mediterranean Studies

This two-day conference is organized by the University of Malta through the Department of Civil Law and the Mediterranean Institute research group on Belief, Identity and Exchange in conjunction with the ERC-funded research project on ‘Problematizing “Muslim Marriages”: Ambiguities and Contestations’ hosted by the University of Amsterdam.

See http://religionresearch.org/musmar2014/
Posted by Olivier Moréteau at 12:44 AM No comments: